Conspiracy theorists are certain satellite imagery can confirm Atlantis’ location in a part of the Sahara covering the nation of Mauritania. The lost city of Atlantis is a mythical island mentioned in the work of the ancient Greek philosopher Plato as early as 350BC. Atlantis is believed by many to have mysteriously vanished after the Atlanteans fell out grace with the Greek pantheon of gods.

The most popular theory explaining Atlantis’ disappearance proposes the entire island was sunk to the bottom of the Mediterranean or the Atlantic Ocean.

According to Plato, Atlantis completely disappeared “in a single day and night of misfortune”.

Despite there being no evidence to suggest Atlantis was something more than a work of fiction, conspiracy theorists have spent decades trying to find it at the bottom of the sea.

But a new theory based on satellite scans of North Africa suggests Atlantis could have spent thousands of years out in the open. 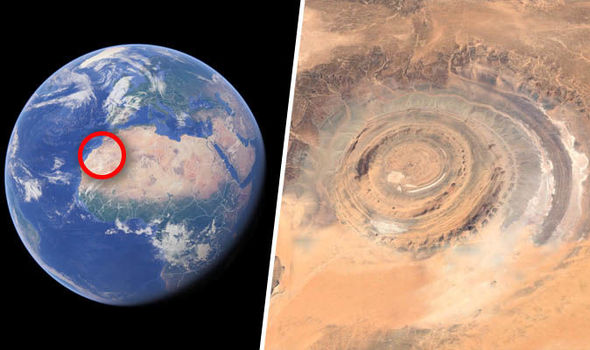 According to BrightInsight host Jimmy, the city of Atlantis could be tucked away in central Mauritania near the town of Ouadane, in a structure known as the Eye of the Sahara.

He said: “Not only did the lost city of Atlantis exist but it’s true location has been hiding in plain sight for thousands of years, completely unnoticed.

“We’ve been looking in all the wrong places for its location since everyone assumed it must be under the ocean somewhere such as the depths of the Atlantic Ocean or the Mediterranean sea, which we can consider the most likely places for its existence.”

The Eye of the Sahara, also known as the Eye of Africa or Guelb er Richat, is an incredible formation of concentric circles dug into the exposed rock of the Sahara.

The unusual formation is largely considered by geologists to be a natural formation caused by a so-called laccolith intrusion.

A laccolith is a sheet intrusion of rocky material injected between two layers of sedimentary rock, which causes a deformation of the ground around.

But if BrightInsight is to be believed, the Eye of the Sahara could be the mysterious Lost City of Atlantis.

According to the YouTuber, the Eye’s shape and structure match many of Plato’s descriptions of what Atlantis looked like.

He said: “The Richart Structure matches Plato’s description of having three circles of water and two of land which is what you would see at the Richart base of its design if there were water flowing into it. 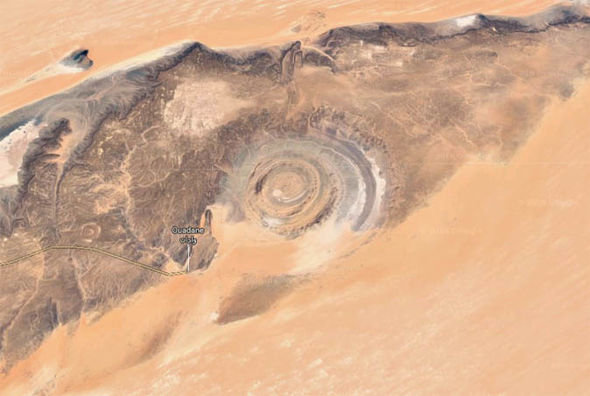 Atlantis location: The Eye of the Sahara can be found in Mauritania (Image: BRIGHTINSIGHT) 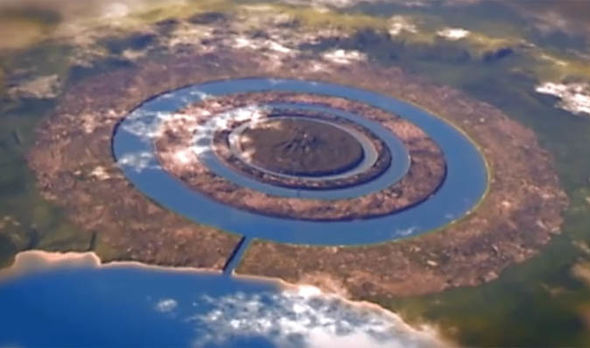 Atlantis location: The ancient city was a work of fiction described by Plato (Image: BRIGHTINSIGHT)

“Not only that, the diameter of the outer circle matches the size described by Plato within a very small margin if not identical.”

The theory was however met with scepticism from the online community with many claiming the Eye of the Sahara is nothing more than a striking natural feature.

Kevin Hollande said: “A lot of coincidences. The only way to prove this theory is to go there and find artefacts and human bones.

And Wilhelm Thomsem said: “The erosion and what makes it look like it was swept by water is winds. It’s really windy in the Sahara.”